Shizuoka Prefecture is the number one tea production region in Japan. Mt. Fuji, located in Shizuoka and Yamanashi Prefecture is the highest mountain in Japan. It was designated as the World Heritage Site this year (2013) and its value and popularity was shared throughout the world. Although Mt. Fuji is a mountain the reason for it being recognized as a World Heritage lies in its cultural value; a mountain that has been worshiped by the people of Japan, and the symbolic mountain was often illustrated and became a subject in the art world, influencing the European artists (especially the impressionist artists) as the woodblock prints were exported to Europe in the 19th century.

About the Artist and Print

Katsushika Hokusai (1760-1849) is an ukiyoe artist and printmaker active in the late Edo period. His best known work is the woodblock print series Thiry-six Views of Mt. Fuji, which gained recognition both in Japan and the Western countries. He was influential to the European artsits such as Monet, Renoir, Degas, Gauguin, and Manet.
Thirty-six Views of Mt. Fuji depicts Mt. Fuji from various locations in different seasons and weahter conditions. The series was first printed in 1831.

Utagawa Hiroshige (1797-1858), also known as Ando Hiroshige, was an ukiyo-e artist active in the Edo period. The use of indigo blue in his print is highly valued and is known to have influenced artists such as van Gogh and Monet. Famous works include The Fifty-Three Stations of the Tokaido and One Hundred Famous Views of Edo.
The Fifty-Three Stations of the Tokaido is a series of woodblock prints, dated 1833-34, that depict the stations located along the Tokaido highway, and is considered to be produced after Hiroshige's first trip to Tokaido.

Yamane-en is a family-operated tea shop based near Sugamo Station on the Yamanote Loop Line in Tokyo and run by tea master Michio Shiobara. With 40 years of experience in the Japanese tea industry behind him, Shiobara-san offers unique teas sourced from small villages throughout Japan as well as a number of tisanes popular in Japan for their health benefits. 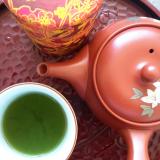 Erikas G. Verified Buyer
Aug 1, 2016
I just really like this tea.As I am a big fan of 深蒸し茶 this tea is what I am looking for.It is a 掛川深蒸し茶 which isn't specified anywhere except the back of the vacuum package.Truly on...view moree of my favourites! view less
0
Load more
If you have any questions, please drop us a line with your question.