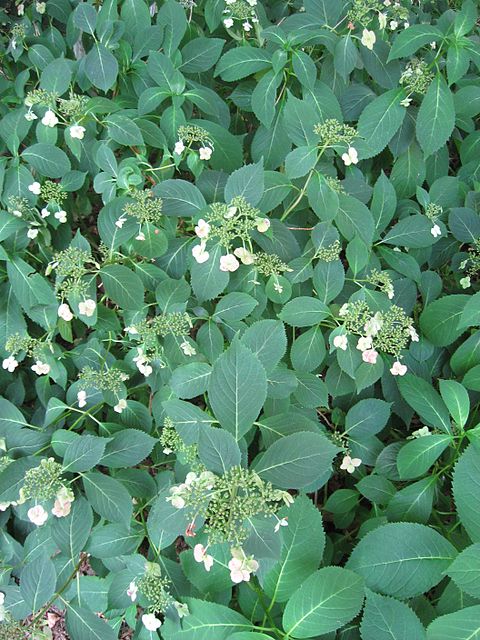 The Kunohe Village Revitalization Project is proud to present a Japanese tradition: Amacha, a tisane harvested in September - October in the hills surrounding the village. The leaves from this plant (a non-toxic form of hydrangea: hydrangea serrata var. thunbergii) are rolled, whithered, and dried in a small facility adjacent to the roadside station Oritsume Rest Area in the village. (see image below)

This tea is known in the west often as "Buddha Ama Cha" because it is often used to celebrate the Buddha's birthday.

The leaves of this plant contain a compound called Phyllodulcin, which is a natural sweetener some 400-800 times sweeter than sugar (See Wikipedia entry Phyllodulcin

Though the leaf from this particular species of hydrangea has never shown toxicity in lab tests, the Ministry of Health, Labor and Welfare in Japan recommends that you do not brew it in concentrated amounts to avoid risk of nausea or sickness. In other species of hydrangea, forms of cyanoside are present in tests (though not in hydrangea serrata nor in amacha extractions).

However, as fair warning, while this tea is drunk widely across Japan at nursery schools run by Buddhist temples to celebrate the Buddha's birthday, two cases of nausea have occurred: once in 2009 when 28 of 119 children reported nausea and vomiting, and once in 2010 when 45 of 99 first year elementary students reported light nausea.

While drunk widely in Japan and among children, please drink at your own discretion. Yunomi and its partners assume no liability for improper preparation of this product.